It's no longer news that the long awaited smash-hit series Seven Deadly Sins is returning next month with a new season.

Adapted from the Japanese Manga series,” Nanatsu no Taizai”, whose creator is none other than Nabaka Suzuki,”

Seven Deadly Sins”, is finally back with a new season, after the much-awaited third season that last released in October 2018. The series was first released in  Japan in the year 2014 and later on released on the online streaming platform Netflix in November 2015.

The second season which was called “Signs of the Holy War Arc”, released on February 27, 2017, and the previous season.

The third,  “Seven Deadly Sins: God’s Wrath”, had been dropped onto the platform in October 2018, and the fourth season which is called ‘Seven Deadly Sins: The Judgment.’ is set to be released this next season.

Its unclear if the fourth season will become the last season of The Seven Deadly Sins considering there are just over 110 chapters remain. But if we are to consider the amount of story and all the fighting compacted into those chapters, there’s no reason to believe why all of it can’t be condensed into two more seasons.

The fourth season has officially been confirmed thanks to the announcement made in Chapter 310 of the manga! This means we were pretty spot on with our prediction for a potential Netflix release date. The fourth season will be called The Seven Deadly Sins: Wrath of the Gods.

When will season 4 of The Seven Deadly Sins be released on Netflix? 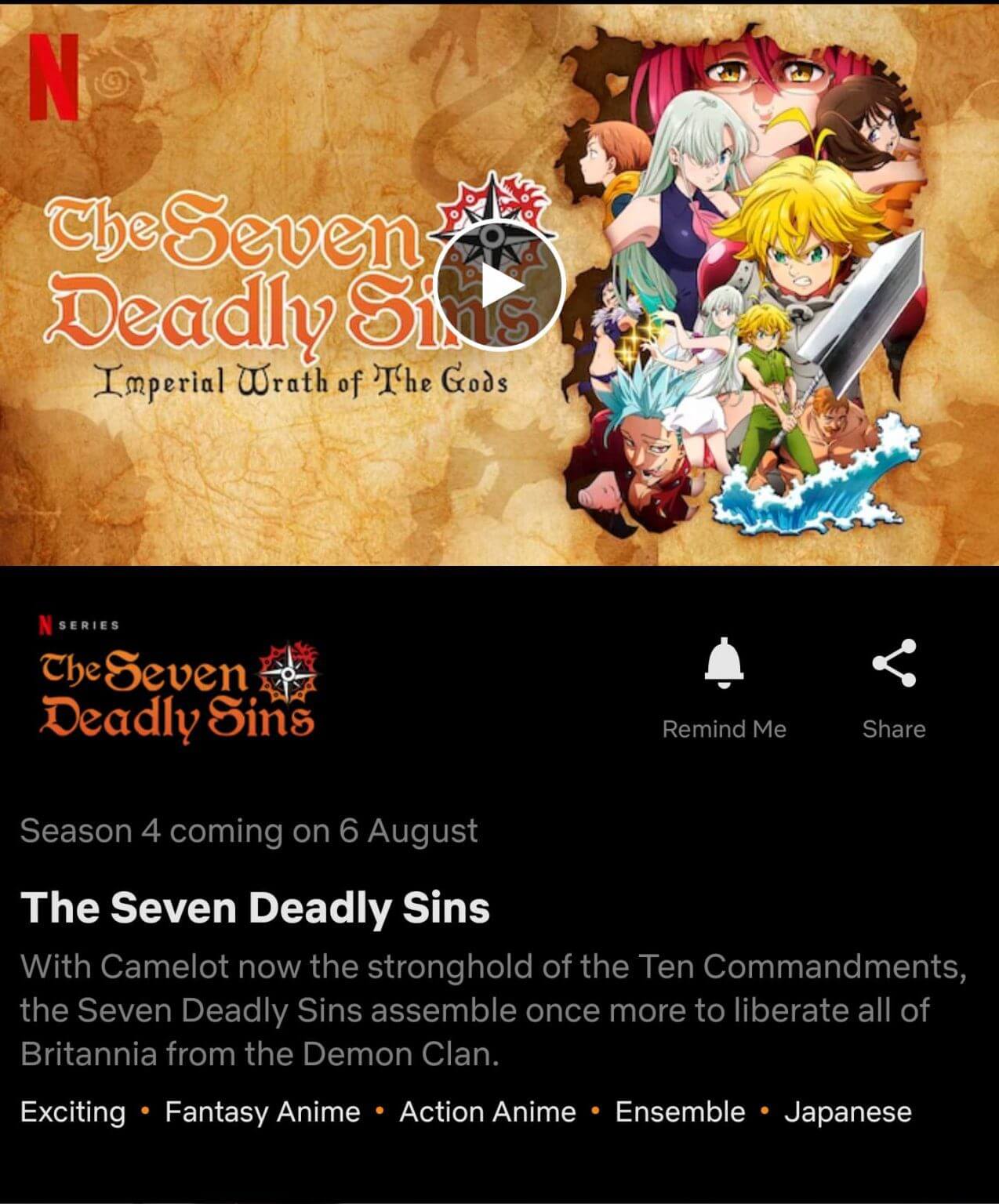 The fourth season of The Seven Deadly Sins is halfway through broadcasting in Japan, taking a short break over the holidays, with the remaining scheduled to be broadcast from the 8th of January, 2020.

Like the previous season, The Seven Deadly Sins will be airing the latest episodes weekly in Japan. This begins on the 22nd of September and with the 2-week Christmas break, the season finale will air on March 25th, 2020.

It’s hard to go into detail to what is expected of season 4 without dropping spoilers from the manga but the following can be expected:

The kingdom of Camelot has fallen to Zeldris and the other commandments. With King Arthur in hiding is this the end of Camelot? Many secrets and revelations will be revealed as Meliodas’ relationship with Elizabeth takes an unexpected turn. As Meliodas takes more risks to protect Elizabeth will we see him finally succumb to his demon form? With the Seven Deadly Sins separated across the kingdom, they must unite once again to take on the lingering threat of the demon clan.